Every now and then, when good friend @ChrisHenderson and I get together, we’ll chat for a little while… And when the awkward silences become too unbearable, we’ll watch an episode or two of Star Trek: The Next Generation.

Last week, Henderson and I wound up at the same dinner party, and wouldn’t you know it, but our gracious hosts were fans of the Trek. Since Henderson and I are shameless histrionic personalities, we live-tweeted the whole thing for an audience that exists primarily in our own imaginations.

Here’s what happened when we sat down to watch Season Six, Episode Four: “Relics”

ChrisHenderson: I like this episode. Riker has a beard. It makes me feel safe. Yet, extremely vulnerable.

Bingofuel: Riker, how would you know the value of the earth’s orbit around the sun, you mouth-breather?

BF: Like Worf’s going to be able to increase the oxygen level! He’s the security officer. Ask him to shoot something. LIKE THE EMITTER ARRAY!

BF: Geordi: “I’ve never seen a transporter jury-rigged like this before.” Me: “Technically, you haven’t seen anything before.”

CH: So, yet again, the Enterprise found something extremely dangerous and mysterious to beam down 3 of their 5 most senior officers to. SAFETY.

CH: Scotty is in this epi. He was stuck in a transporter. How did he gain all that weight, when he was broken down into his constituent parts?

BF: Scotty just looked at Worf like he had two heads. Or, you know, one really fuckin’ big misshapen one.

BF: I like how Scotty’s regaling Geordi with old engineering tales, and Geordi’s just, like, checking his text messages and shit.

CH: Scotty and Geordi are nerding out over ship engines. If they get stuck in the turbolift, they’ll probably be tempted to touch silly parts.

CH: Geordi is annoyed and thinking about shipping Scotty to the USS Barack Obama, where old people have their fate decided by DEATH PANELS. 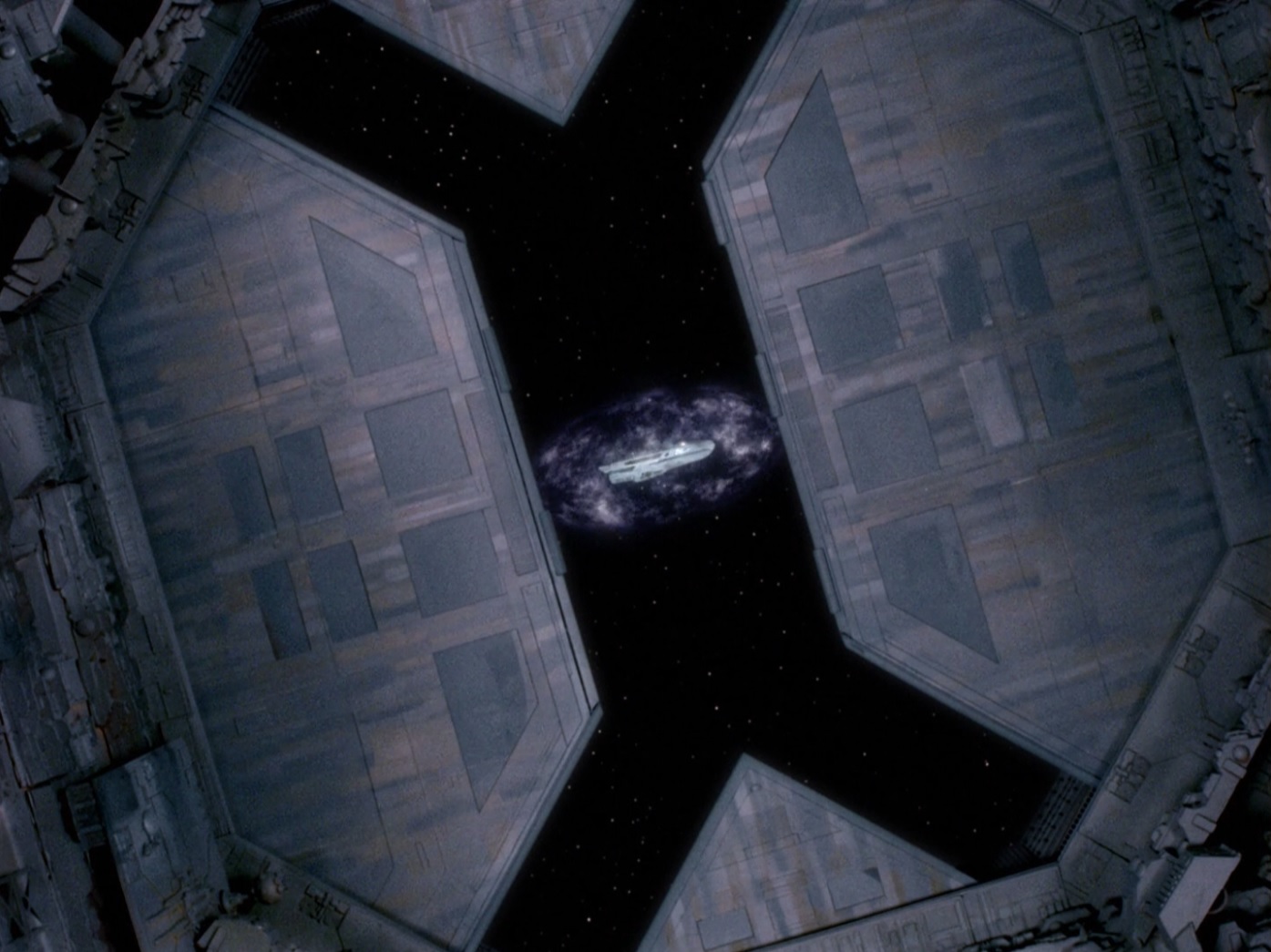 The USS Jenolan, aka the Little Ship That Could For As Long As The Enterprise Needed To Escape™

CH: Apparently being a Lt. Commander also allows you to tend bar at 10-Forward, which, if I do say so, is the stupidest name for a bar ever.

BF: FUCK YES. Captain Picard is downing Aldebaran whiskey shots with Scotty. I want to go on a starship pubcrawl with them! SPRING BREAK

BF: How come no one ever goes into the holodeck and says, “Load the muthafuckin’ Tron laser-bike program, and disable the safeties, bitch”?

BF: The Dyson Sphere conjures images of Miles Dyson, creator of the Terminator. My advice to the crew of the Enterprise: DON’T GO IN THERE.

BF: When has auxiliary power NOT failed, nameless ensign?

BF: Riker will see about getting main power back online. Probably by head-butting a computer terminal.

CH: @bingofuel I think it’s more likely that he’ll seduce it and then use his cold-hearted manliness to leave it yearning for him forevermore.

CH: Scotty laughs at everything Geordi suggests. Scotty is a damn racist.

BF: Scotty: “I never wanted to be anything but and engineer… an Ewan MacGregor’s body double in Star Wars: Revenge of the Sith.”

BF: Fact: the USS Jenolan is named after the Jenolan Caves in Australia. Booyah… uh, and prosper.

BF: New fact: the FORMER Jenolan… it was destroyed by the Enterprise. No respect for history.

CH: The Enterprise just shot the gap on the Death Star: “SISTA BE DRIVIN!”

CH: Geordi is the Chief Engineer OF MY HEART. Incidentally, I’m Admiral of my own bathtub.

BF: @ChrisHenderson I wish *I* had a bathtub admiral! SISTA BE BATHIN’!

This is the first it what will “hopefully” become a semi-regular series of posts… as long as @ChrisHenderson and I can find time to sit down and nerd the hell out… Mad thanks to the teams of monks at Memory Alpha, the finest wiki-reference for Trek on the whole planet.

4 Responses to “TwitterTrek: for a bored generation”