Whatever you think of the Games — and I personally have a love/hate relationship with them ever since I was cut from the Canadian jet-luge team (no longer an Olympic sport) in the mid-90s — this definitely marks an historic moment in Canadian history, only the third time the games have taken place in our country. The last time was in 1988 in Calgary, when mascots Heidi and Howdy graced every toque, coffee mug and mitten in existence in this country. Before that, Montreal hosted the summer Olympics in 1976, which allowed them to score a now-dilapidated stadium as a permanent fixture on their landscape. 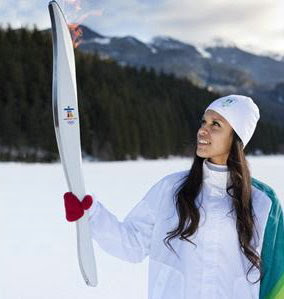 And while boondoggles and over-priced construction projects are a fact of life when hosting the games, I can’t help but feel really excited about the Vancouver Olympics, even though I’ll be nowhere near them when they’re taking place, unless you consider Edmonton to be nearby Vancouver, which I suppose it is when compared to someplace like, say Marrakesh. I’m excited for all my pals in VanCity who’ve decided to stick it out and check out the action of the games in their home town. I’m excited for the people of Vancouver to see what awesome things they’re going to do with the games. I’m excited for a few of the events, except most of the judged ones, which I also judge though in an entirely different way. Mostly, I’m excited for Canada — proud to have this international event, despite its controversies, in our country.

The real question, though, is whether or not the rest of the world actually gives a shit. Have the Olympics been properly promoted and publicized to the rest of the planet, or will this wind up being the Olympic Games where every single spectator is a Canadian, or US border-state resident? I’m certain every single federal MP will be in attendance, thanks to Prime Minister Harper’s proroguing of Parliament, but aside from a bunch of stuck-up government types, are the games even accessible to the average citizen?

I know I certainly couldn’t afford to go, not even if I crashed on the floors of some of the excellent people I know living on the west coast. So I have to settle for Edmonton’s torch relay and day-time broadcasts of Olympic events in February, when the games finally arrive. And while the rest of Canada rides the coattails of Vancouverites fortunate and crazy enough to be staying on the Lower Mainland, I’ll be keeping my eye on Canada’s medal count, while at the same time trying not to become too invested for fear the Canada Men’s Olympic Hockey team doesn’t win the gold medal.

If you have some time tomorrow afternoon, be sure and check out the torch relay events taking place here in Champion City. Click here for details!

culture, In the City
culture
culture